Nigerian Politicians That Went To Jail 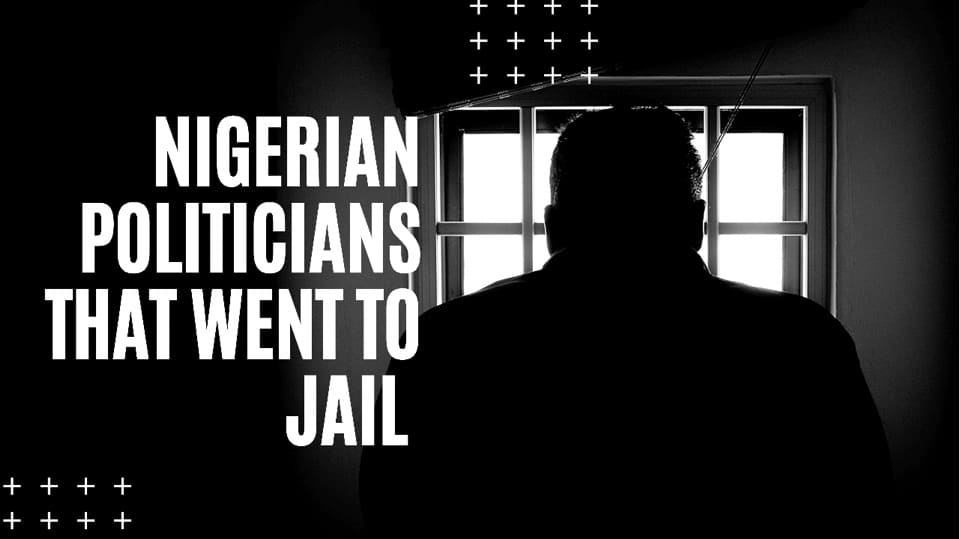 They later discovered a total of £1.8 million ($3.2 million) in cash and bank accounts. Alamieyeseigha pled guilty to six counts in a Nigerian court on July 26, 2007, and was sentenced to two years in jail for each offence. Most of his properties were ordered to be turned over to the state government of Bayelsa.

Alamieyeseigha claims that he only pled guilty owing to his age and that if he had been younger, he would have fought the accusations. President Goodluck Jonathan pardoned Alamieyeseigha in 2013 although his pardon was widely criticized.

In 1999, Joshua Dariye was elected Governor of Plateau State, Nigeria, on the People’s Democratic Party’s platform. He was arrested in London, England in January 2004, with large sums of money while serving as governor. He wasn’t arrested because serving governors have immunity.

Nevertheless, the EFCC was waiting until his term in office ending in 2007 to charge him. He was charged with stealing public funds up to $9 million as well as money laundering. In 2007, the EFCC charged Dariye with 23 charges of money laundering concerning the alleged theft of N1.126 billion in Plateau State Government environmental funding.

In 2018, the High Court of the Federal Capital Territory, sentenced Dariye to 14 years in jail. The sentence was subsequently appealed, and the Supreme Court finally handed down a final judgement of ten years in prison for the crime committed.

James Ibori won the Delta State governor election on January 9, 1999. After his first tenure, he was re-elected. Ibori was once arrested in Dubai, United Arab Emirates, in 2010 by the Metropolitan Police on the orders of the Interpol.

Following Ibori’s guilty plea, the EFCC placed before an Appeal Court a 2009 judgment by a Federal High Court in Asaba, that acquitted Ibori. Ibori was sentenced to 13 years in prison by Southwark Crown Court in 2012. After a court ruling, he was freed from jail in December 2016. He served four years of the thirteen years he was meant to serve.

Jonah David Jang was a key player in the formation of the Peoples’ Democratic Party in the days leading up to the Nigerian Fourth Republic in 1999. He was Plateau State Governor from 2007 to 2015; serving two tenures.

The Economic and Financial Crimes Commission (EFCC) arraigned Jang in the Plateau State High Court of Justice, Jos, in 2018 on charges of fraud totaling 6.3 billion naira of Plateau State finances when he was Governor of the state. After his bail plea was denied by the court, he was detained in Jos prison.

After staying in prison for one week, he was finally granted bail. The politician expressed his displeasure for the ill justice over his arrest, detainment, and bail denial.

Olisa Metuh is a lawyer, politician, and former People’s Democratic Party National Publicity Secretary. The Economic and Financial Crimes Commission (EFCC) him in 2016 following inquiries about an arms deal that was allegedly connected to his business. It involved up to N400 million.

In 2020, he was sentenced to 7 years imprisonment by a Nigerian high court. After his sentencing, the judgement was nullified by an appeal court. By December that year, he was granted bail to the sum of N250 million. Eventually, the money was paid and the politician was later released in 2021 after serving just 10 months.

Alhaji Mukhtar Ramalan Yero served as the Commissioner of Finance for Kaduna State from 2007 till May 2010. In 2010, Patrick Ibrahim Yakowa appointed him as the Deputy Governor after Namadi Sambo was appointed Vice President of Nigeria.

Following the death of the then Governor Patrick Ibrahim Yakowa in a helicopter mishap in December 2012, Mukhtar Ramalan Yero was appointed Governor of Kaduna State. In 2018, he was arrested and convicted on 4 counts of corruption.

The politician was convicted along with Abubakar Gaya-Haruna, former Chairman of Peoples Democratic Party (PDP) in Kaduna, and Hamza Ishaq, former Secretary to Kaduna State Government. He was arrested on corruption counts of up to N750 million.

During his seven-month term as governor, Bala James Ngilari of Adamawa state was found guilty of unlawfully granting a 167 million naira ($1 billion) contract to acquire automobiles.

Ngilari was sentenced to five years in jail by Judge Nathan Musa, who ruled that a fine was not an option. The penalty, he added, should serve as a reminder to other governors to follow the law.

Since President Muhammadu Buhari took office in May 2015 and pledged a war on the chronic corruption that has impoverished Nigeria, Ngilari is the first senior government person to be successfully prosecuted.

The politicians on this list are not the most corrupt in Nigeria. A few were sent to jail without proper trial which means they could be innocent. Nevertheless, it’s an open secret that Nigerian politicians are corrupt.