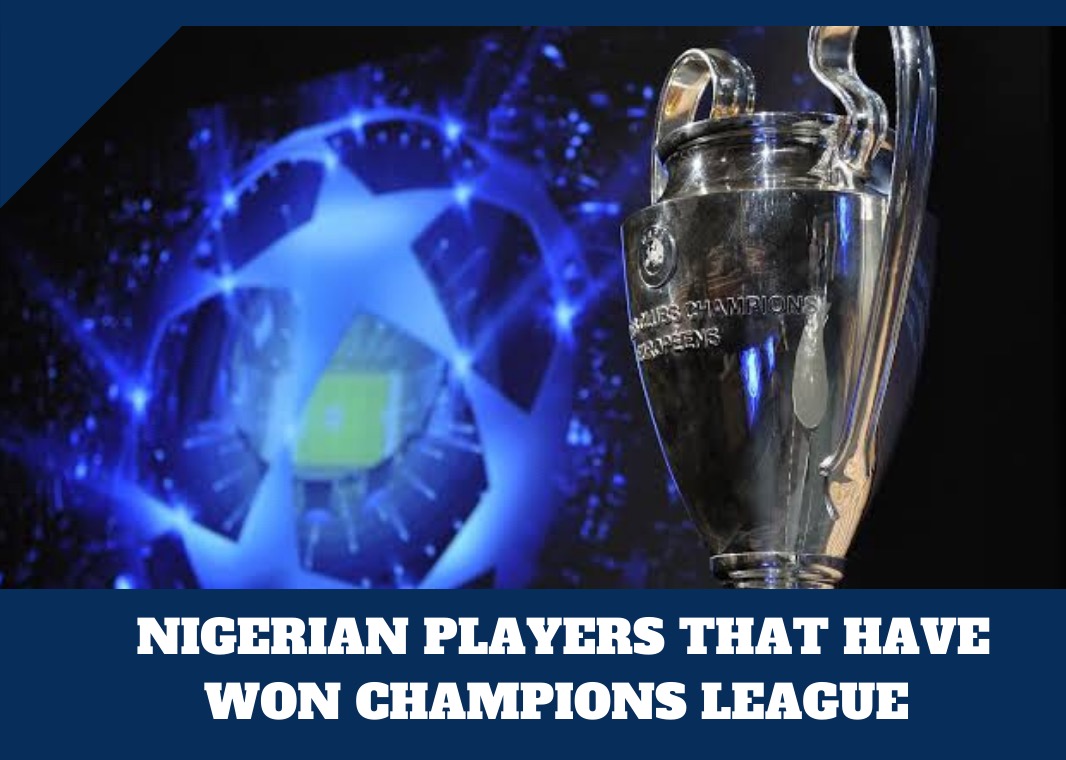 The UEFA Champions League, played every year, is the highest trophy at the European club level. About 32 teams contest for the trophy from the group stages into the 3 knockout rounds and then the final. Every fixture is played home and away except the final that’s played on a neutral location.

Since its launch in 1955 and rebranding in 1992, several Nigerian players have played in the prestigious competition. However, not many have been privileged to win the trophy with their teams. Only 3 Nigerian players have won the UEFA Champions League. Do you want to know who they are? Read on as I’ll be discussing all their winning.

The first player on this list of Nigerian players that have won the champions league is Nwankwo Kanu. Kanu is one of the most decorated players in football history as he captained the team to the 1996 Olympics Gold medal, just a year after winning the UEFA Champions League and he’s also won the AFCON as well.

Kanu was very instrumental in Ajax’s Champions League-winning campaign. In the final game, he started as a substitute and only came on in the 53rd minute replacing Clarence Seedorf. When he came on the field, he outrightly changed the pretensions of Ajax’s midfield. The attacking tempo of the Dutch champions increased which led to their late-minute winning goal.

Soon after coming on, Kanu won Ajax a corner and had a shot that was slightly off target. He squared a ball for Danny Blind, the captain and Ajax would have taken the lead then if not for AC Milan’s Sebastiano Rossi’s save. Well, it didn’t take long from that before the team tried again and this time they found the net. Notably, 1995 was the last time Ajax won the prestigious European trophy.

Finidi George played as a right finger for the Super Eagles during his playing days. As mentioned earlier, he won the UEFA Champions League with Ajax alongside Kanu Nwankwo. He wore the number 7 jersey and Ajax was where he made his name and the UCL trophy crowned it all.

After winning the Champions League in 1985, Finidi George and Nwankwo Kanu remained with Ajax and would go on to make another final appearance in 1996. However, Ajax would, unfortunately, lose to Italian side Juventus on penalties.

Finidi George was a valued asset to Ajax in the UEFA Champions League thanks to his speed, insight, and technique. On top of that, he was a very good goal scorer and found the net a couple of times. However, he couldn’t do much in the final match even if he played for the full 90 minutes. He was held down by Paolo Maldini, one of football’s best defenders.

After the following season when Ajax reached the UCL final for a consecutive time. Finidi George was voted as the best right-winger in the World. The player also won the UEFA Super Cup with Ajax following their Champions League victory. Nwankwo Kanu was also part of the winning team.

After leaving Ajax in 1996, Finidi George went to the Spanish La Liga where he played for Real Betis. As a winger, George scored a lot of goals. Finidi George is still celebrated as a legend by Ajax for his contribution to their UEFA Champions League-winning season. He’s named among Ajax’s greatest 11.

The last on this list and the latest Nigerian to win the UEFA Champions League trophy is Mikel Obi. Mikel Obi won the cup in 2012 with English Side Chelsea. It was the first that the Blues would win the trophy.

In that season, Mikel benefited from Essien’s injury and thus found more playing time. Nevertheless, Chelsea signed a new player Romeu who took his place. Not long after, Chelsea replaced their manager and the new manager had Mikel in his plans.

He played the full 90 minutes and extra time of the UEFA Champions League final against Bayern Munich. Chelsea first conceded late into the match. When everyone thought hope was lost, Didier Drogba got the equalizer which sent the game into extra time.

None of the teams could find the net during the extra time so the game went to penalties which Chelsea won 4 – 3. Mikel was very instrumental in the final win. According to Jamie Redknapp, a Sky Sports Pundit, Mikel put up a performance he didn’t think he had as he was putting out fires everywhere.

Mikel was winning tackles everywhere, breaking up play at the right time, and making interceptions. Most people say the performance of the talented midfielder was slept on due to the heroics of fellow African teammate Didier Drogba.

According to Mikel Obi after the game, it was an immense feeling to win the UEFA Champions League as everyone has written Chelsea off. With the win, Chelsea became the first London team to lift the prestigious trophy. Other London teams like Arsenal and Tottenham are yet to win it.

Nigerian players like Jay-Jay Okocha, Emmanuel Emenike, Celestine Babyaro, Taribo West, and Obafemi Martins to name but a few have participated in the UEFA Champions League competition. However, only the 3 listed in this article have been privileged to win it.

With many other Nigerian players currently playing in some of Europe’s top teams. The list of Nigerian players that have won the Champions league could include more than 3 names in a few years.

Share on FacebookShare on TwitterShare on Linkedin
KanuMikelUEFA CHAMPIONS LEAGUE