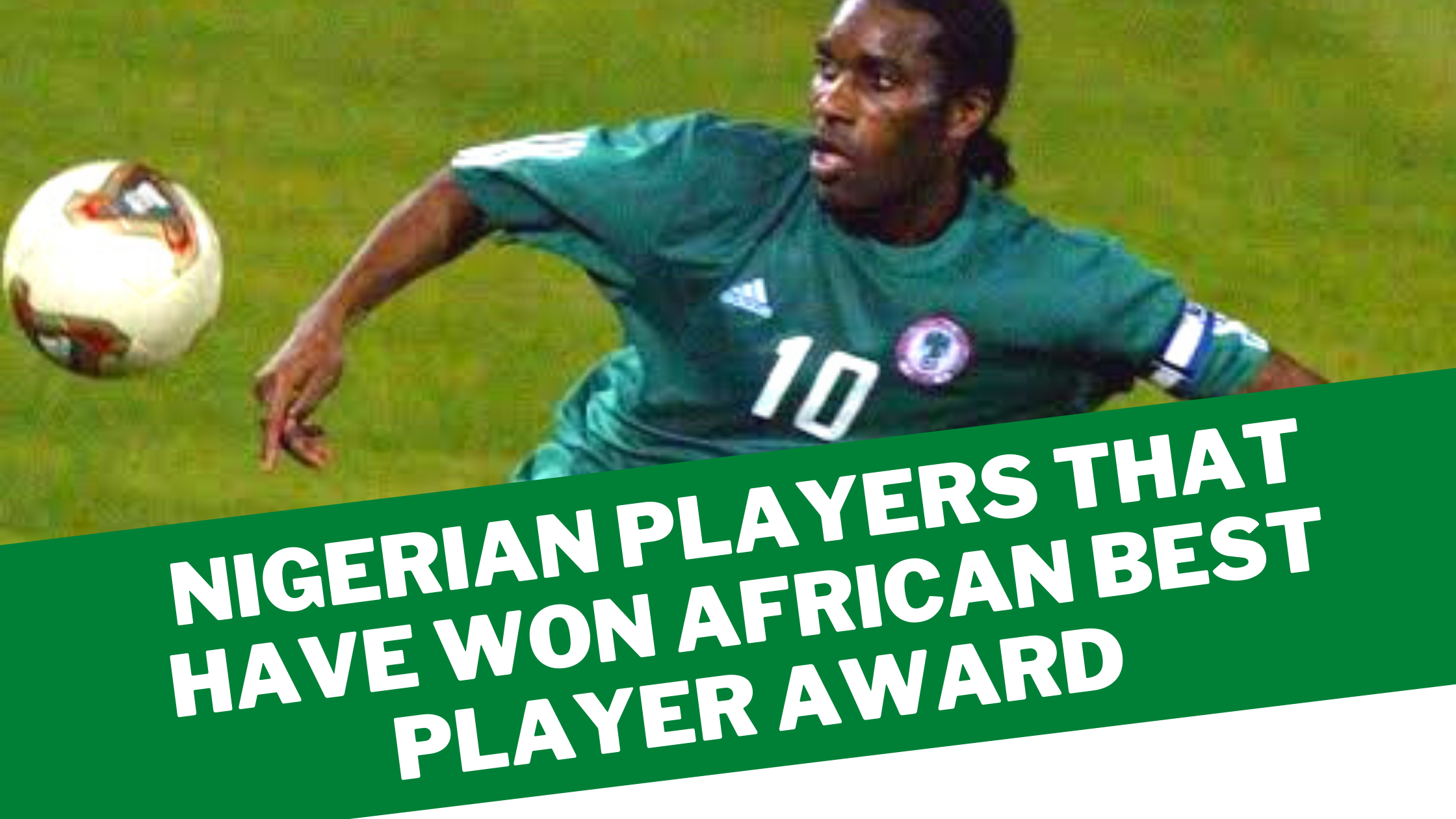 Yearly, the Confederation of African Football awards the best player. The African Footballer of the Year award, also known as African Best award has been won by players of different nationalities over the years. Over the years, Nigeria has produced some of the finest footballers in Africa. Some of these players left a mark even in the European scene. In this article, we look at Nigerian players that have won the African Best Player award.

Nwankwo Kanu is the first and only Nigerian player to win the African best player award on two occasions. He won his first in 1996 and his second in 1999. In 1996, Kanu, aka Papilo, captained Nigeria in the Olympic Games where they won the gold medal. His late goals in the semi-finals against star-studded Brazil was vital in the campaign. Also in 1996, he left Ajax after just winning the UEFA Champions league for Inter Milan.

He won the African best player award ahead of George Weah and teammate Daniel Amokachi. In 1999 when Kanu won his second best player award, he was signed by Arsenal. He was known as a super-sub as whenever he came off the bench, his impact was felt in the game. He scored 17 times that season and his 15 minutes hat-trick against Chelsea will always be remembered by Arsenal fans.

Emmanuel Amunike was the first Nigerian player to win the African best player award after he won it in 1994. At the time, he was a player for Sporting CP in Portugal and he won the award ahead of George Weah and team-mate Rashidi Yekini. The battle was a close one as Amunike topped George Weah, who was playing for PSG at the time with just 2 points.

In 1994, Amunike was instrumental in helping Nigeria win the AFCON trophy. That was the major boost for his award as the best player in Africa. Nigeria also made it to the FIFA World Cup in 1994 where Emmanuel Amunike found the net on two occasions. The following year, in 1995, Emmanuel Amunike finished second on the African best player ranking. He was only topped by George Weah who was in top form for AC Milan at the time.

For the first time, a Nigeria player would win the African best player award consecutively after Victor Ikpeba won the award in 1997. Kanu had previously won the award in 1996. Victor Ikpeba was part of the Nigeria 96 team that won the Olympics Gold Medal. However, the year before then, he was hot in France where he helped Arsene Wenger’s Monaco to the league trophy. He found the net 13 times that season.

In the 1996 to 1997 season, Victor Ikpeba was the second highest goal scorer in the UEFA Cup. This was the major reason why he was awarded the African best player award in 1997. Victor Ikpeba won the award with 56 points ahead of his Monaco team-mate Japhet N’Doharm of the Republic of Chad, and Nigerian team-mate Taribo West who was an Inter Milan player at the time.

The 3 players listed above are the only Nigerian to win the African footballer of the year award. However, there are other players that have been so close to winning the prestigious award on one or more occasions. They include;

Rashidi Yekini has made the African best player of the year list on two occasions. The first was in 1993 when the award was still being issued by France Football. He came 3rd on the list losing to Abedi Pele and Tony Yeboah. However, he scored more than 100 voting points that year. It was the first time a Nigerian player was appearing on the list of the African best player.

Yekini was a brutal goal scorer at the time as he has scored 21 times that year. The previous year, the player found the net 34 times in just 32 games which was the best ever in his career. He made the list for third position again in 1994, the year which Emmanuel Amunike won the award.

Notably, he scored in the final game against Argentina. In 1994, he was part of the Nigerian team that won the African Cup of Nations Trophy. During the years, Daniel Amokachi played for Everton and then Besiktas. He made a combined 120 appearances for both teams scoring 29 goals.

This man needs no introduction. Although he didn’t actually win the African best player award, he’s arguably the most skillful player African has seen. He made the African best player list 3 times which is the most for any Nigerian player. His first was in 1998 when he finished second and just 2 points behind the winner. Hadji won the award that year and it was due to his performance in the FIFA World Cup.

Only 3 Nigerian players have managed to win the African best player award since it was launched and only one Nigerian player has won it more than once. Other players have come very close finishing second or third place on different occasions. Hopefully, the new age players would be able to win more of the CAF award.

Share on FacebookShare on TwitterShare on Linkedin
African BestAmunikeIkpebaKanuOkocha