Did Nigeria Fight In World War 2? Find Out 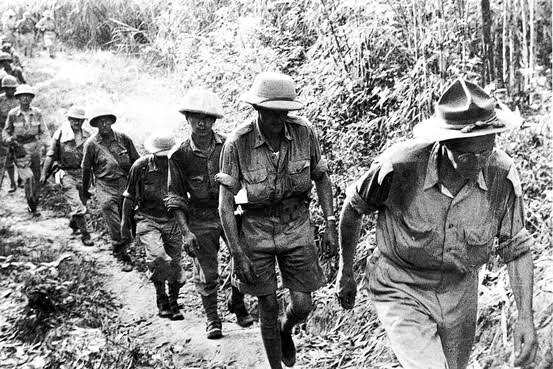 Did Nigeria fight in World War 2? The answer is YES! Find out all the facts in this Nigerian Infobusstop article.

Wars begin, and wars end. In Nigeria, the infamous civil war fought after independence easily comes to mind whenever the W.A.R word is mentioned. However, it’s not the first serious war that the West African country participated in.

The Second World War, aka WWII or WW2 was fought on every continent. Although the majority of countries went to war from 1939 to 1945, several really began fighting as early as 1937.

During World War II, most nations participated in two opposing military coalitions, the Allies and the Axis Powers, respectively. The fight was the largest and costliest in human history.

Most of the estimated 50–85 million casualties were members of the general population. Massacres, the Holocaust, strategic bombing, famine, disease, and the first and only use of nuclear weapons on people occurred during this war.

The Allies consisted of China, France, and the United Kingdom initially, and later expanded to include the Soviet Union, the United States, and others. The Axis consisted of Germany, Italy, Japan, Hungary, Croatia, Romania and Bulgaria.

Japan’s invasion of China on July 7, 1937, marked the beginning of World War II in Asia. Germany invaded Poland on September 1, 1939, and war broke out throughout Europe.

By 1941, Germany had conquered a large portion of Europe, including France. In North Africa, the Mediterranean, and the Atlantic, only the British continued to battle against the Axis powers. After suffering heavy losses in the air, Germany decided to abandon its invasion plans for Great Britain.

When Germany attacked the Soviet Union in June 1941, it sparked the biggest theater of war in human history. Both the Pacific War and the European War merged on December 7, 1941, when Japan launched an attack on Pearl Harbor and invaded British and French possessions in Asia.

Stopping the Japanese advance in 1942, the Soviets also won the massive Battle of Stalingrad that year. In 1943. Soon after, the Allies began to gain ground in every front. The Axis powers were pushed back into the Soviet Union, they lost North Africa, and they were tasked with defending Italy beginning in 1943.

Due to Italy’s extensive defenses, Allied forces had a hard time making progress toward the country. The Allied invasion of France and subsequent advance into western Germany in 1944 was followed by the Soviet invasion of the country from the east.

On that day in 1945, Germany formally capitulated. After the United States and its allies dropped two atomic bombs on Japan on September 2, 1945, the Japanese formally surrendered and the war ended.

After the war, the United Nations was created to develop support amongst countries and to prevent future hostilities. Since Europe was weakened by the war, decolonization occurred throughout Asia and Africa.

Nigeria was one of the African countries to benefit from decolonization, as she gained independence from Great Britain in 1960.

Nigeria’s Role During The War

After the invasion of Europe by the Axis Powers, Britain and France desperately needed a new source of combatants, so they turned to their colonies.

Britain declared war on Nazi Germany in September 1939, and Nigeria, then a British colony, joined the war effort. Nigeria had a crucial role in the Allied strategy in Africa because of its importance in the African theater of war.

Because of Nigeria’s strategic location in Africa, the British Empire recruited and trained a number of Nigerian infantry battalions to fight in several conflicts across Africa and Asia.

Over the course of the conflict, 45,000 Nigerians fought for the British in Africa and Southeast Asia. The British Army’s 81st and 82nd West African Divisions were largely composed of Nigerian troops.

Military personnel from Nigeria served in conflicts primarily in Burma and India. An initial sign of Nigeria’s entrance was a verbal agreement to declare war on Germany alongside the Allies.

A voluntary fundraising effort called the Nigerian War Relief Fund (NWRF) was launched within days of the declaration to rally locals in support of Britain. At first, many Nigerians supported the war effort. Though many Nigerian men enlisted voluntarily, some were conscripted.

Nigeria’s Involvement In The Burma Campaign

British leadership made the decision to construct two divisions to fight in southeast Asia after the success of the Allied wars in Africa and the increasing need to send forces abroad. In 1943, the 81st Division was established from brigades in West Africa and sent to combat.

The 82nd (West Africa) Division was established in 1944 and dispatched from the west coast of Africa to British Ceylon (modern day Sri Lanka) across the Indian Ocean. Moving to Burma in December of 1944, they joined the third Arakan battle.

As the Allies advanced into Burma, they encountered a Japanese Imperial force that was both more seasoned and better established. Nonetheless, the Allies were successful in driving the Japanese out of Burma by making use of airdropped supplies and the jungle landscape.

The Nigerian forces proved to be particularly adept at the logistical and tactical challenges posed by the forest environment for the Allies.

While British soldiers relied on more conventional means of resupplying, the West African divisions were able to outmaneuver even the renowned Chindit units of Burma thanks to the assistance of their African porters.

The Battle of Myohaung, a hastily planned operation to seize the town of Myohaung, was the largest conflict of the campaign fought by Nigerian soldiers. The city was surrounded by both Nigerian divisions, with the 81st Division returning to India once it had been captured.

Japanese soldiers realized they were trapped after a severe battle on the city’s outskirts and decided to flee. Because it was located on critical supply routes for Japan, the retaking of Myohaung was crucial.

As a result of Allied actions, Japan was eventually compelled to abandon the Mayu peninsula, and the Allies were able to seize territory that had been in Japanese control for nearly four years.

British forces advanced around the Mayu peninsula until the Japanese completely surrendered. They couldn’t have won this campaign without the participation of the Nigerian military.

Share on FacebookShare on TwitterShare on Linkedin
ArmyWarWorld War

Life In Turkey: As A Nigerian, What You Should Know