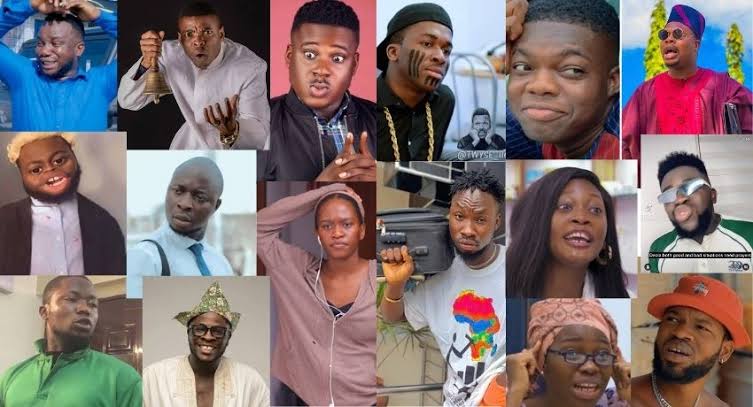 Online skit making has gone from being just about jokes and laughter to being an activity that produces stars. Skit makers go above and beyond to create outstanding content for their audience across Instagram, TikTok, and Twitter, among other social media platforms.

Mr Funny, more popularly known as Sabinus, is number one on this list as he’s a fan favorite. The talented comedian and skit maker won an AMVCA in 2022 for his content making prowess.

Sabinus has millions of followers on Instagram, Twitter, TikTok, and YouTube. These are the platforms where he mainly shares his skits, but the most popular of all is Instagram, where he has 2 million followers.

His comedy skits often end with him falling victim to avoidable situations.

There was a time when “you’re doing well” was on the lips of every Nigerian. That was Mr Macaroni’s doing, and since then, he’s grown to become one of the leading skit makers in Nigeria.

His skits are versatile, although mostly about him giving unmerited and frivolous money benefits to fantabulous women. He often features Mummy Wa in his skits.

Broda Shaggi has over 10.4 million followers on Instagram, making him a top candidate for the most followed skit maker on the social media platform. 10.4 million+ people follow Broda Shaggi because of his rib-tickling content.

He often creates relatively long skits when compared to what’s considered standard in the industry. This is why you’ll have to use YouTube to watch most of his skits, even though he always posts them on Instagram.

Aside from skit making, Broda Shaggi has starred in some high-grossing Nollywood movies on Netflix. He’s also a singer.

“Sum just happen right now.” You won’t be a Nigerian skit-follower if you don’t know that phrase. Lasisi, self-acclaimed Nigeria’s number one ranter, was one of the pioneers of skit making in Nigeria.

Despite the evolution of skit making in Nigeria—now featuring multiple actors and capturing scenes from different angles,—Lasisi has stuck with his traditional means.

This is why he’s always the only one in his skits and records in POV. He began in the hay days of Snapchat in Nigeria with the wide mouth filter, a filter he still uses today.

Taaooma is unarguably the biggest female skit maker in Nigeria. In an industry dominated by males, she’s managed to stand out with her sui generis skit-making style. Taaooma is also an award-winning online skit maker.

If this list was based on any categorical order, Sydney Talker would rank higher. Known as the Towel Guy, Sydney Talker was another pioneer of skit making in Nigeria. Notably, he was among the firsts to make skits featuring multiple actors.

Zicsaloma is one of the many Nigerian comedians and skit makers that acquired fame during the infamous lockdown period in 2020. He said it himself, in an interview, that it was the lockdown that made him begin actively creating and uploading skits.

Although he creates versatile content, most of his skits depict him as a woman, or, at least, a caricature of one. He’s also a very good singer, which you’ll know if you watch his skits. Zicsaloma is popular on Instagram with over a million followers.

Josh2Funny is the one and only Nigerian comedian and online skit maker to set a global trend. Remember the Don’t Leave Me challenge that had participants from all over the world? Yeah, that was Josh2Funny.

Nowadays, his skits are often funny and gospel-esque remixes of popular Nigerian songs, one of which he performed for Rick Ross when the Mississippi-born rapper visited Nigeria.

He currently has over 2.1 million followers on Instagram. Away from the spotlight, Josh2Funny is a husband and a father.

Brain Jotter makes unprecedented comedy skits. Usually, he acts as a nuisance, and at the end of the day, tells the other person to “Abeg, Getat.” He acts with other actors and also creates solo content.

You’ll easily recognize Brain Jotter in any comedy skit from his green attire and typically dawdling speaking pattern. The skilled content maker has garnered over 1.5 million followers on Instagram.

To end this list of the best comedy skit makers in Nigeria, we have Nasty Blaq. Nasty Blaq, now one of the fan favorites, gained fame as a regular feature in Sydney Talker’s skits.

He currently has 2.6 million followers on Instagram, and is lauded for featuring less femininity in his skits.

Share on FacebookShare on TwitterShare on Linkedin
ComedySkit makers